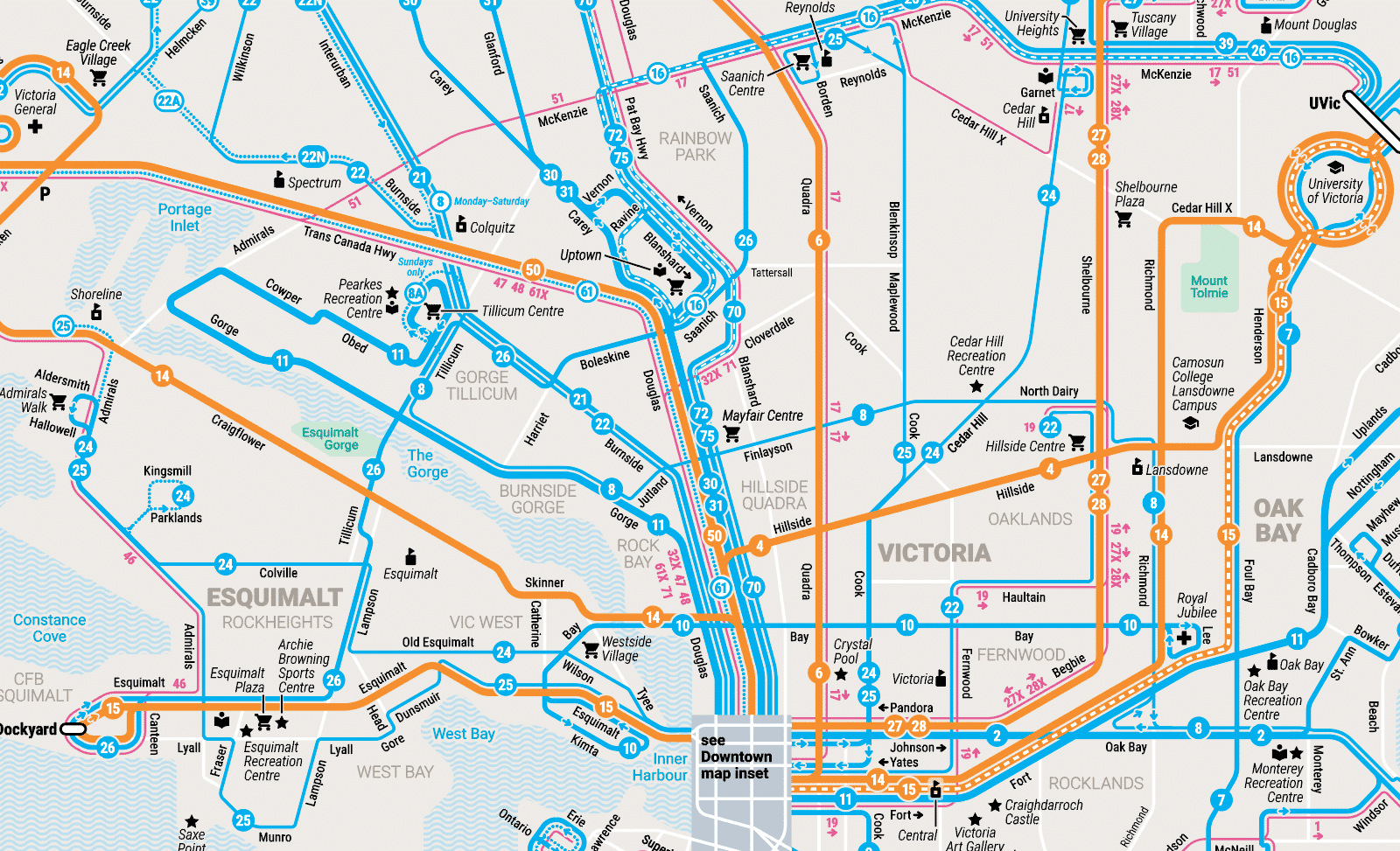 Hi, I’m Owen, Mass Velocity’s resident cartography nerd. Born out of a love of transit maps and a desire to see if I could create something more user friendly for my hometown, I created a draft of a potential frequent transit map for Victoria, British Columbia. This map uses real service levels circa late 2017, and is not a ‘fantasy’ transit map. Instead, it’s designed for every day use, by locals, tourists, and new residents alike. 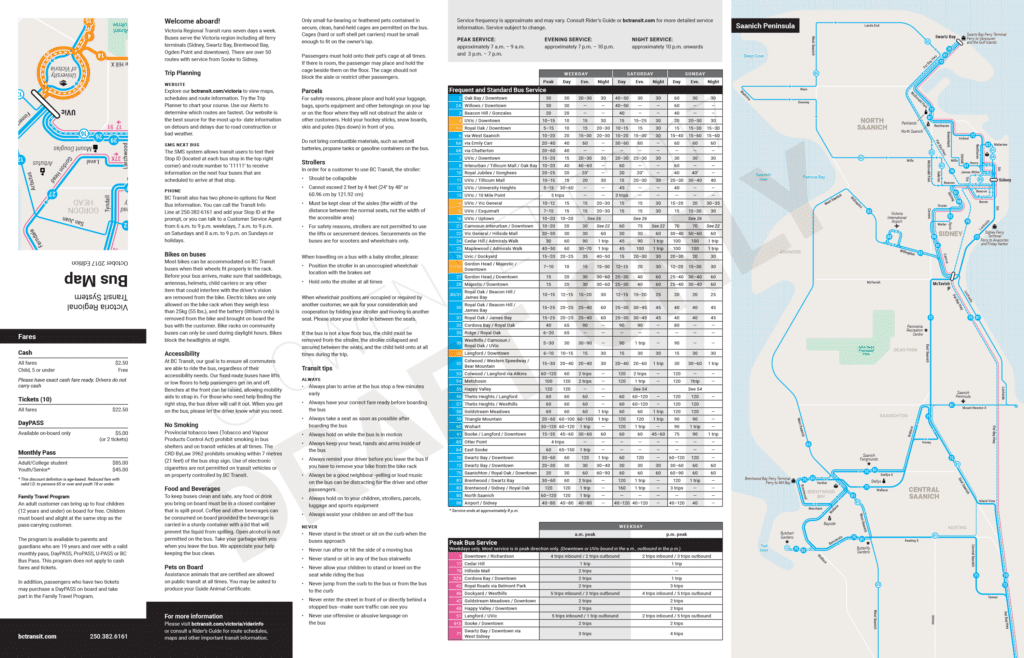 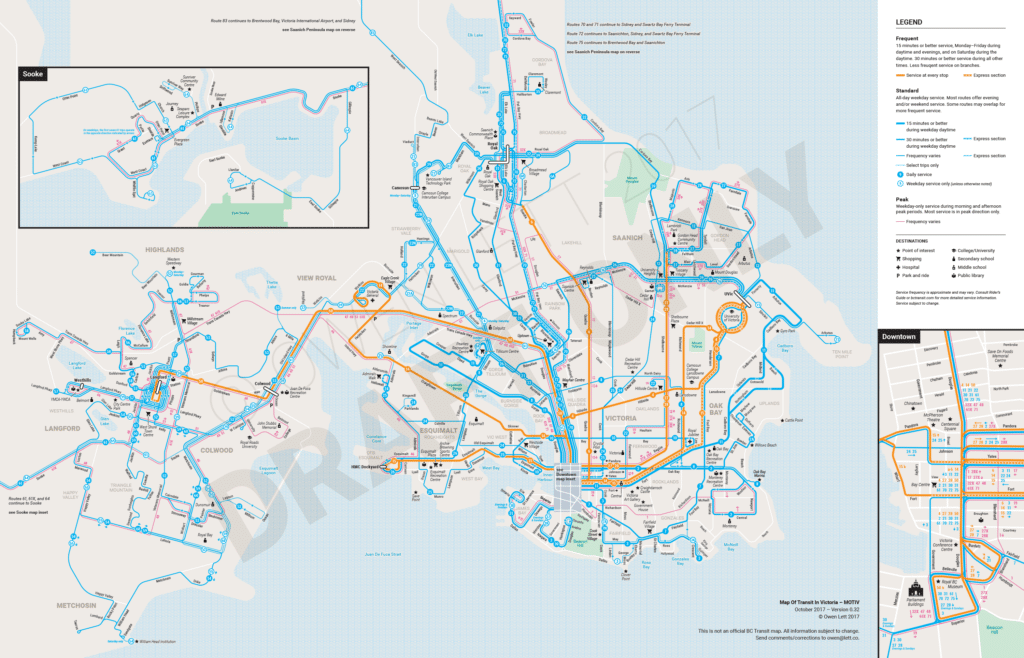 There were two primary purposes for this map: to make routes more legible from end to end, and to show different levels of service frequency.

The overall design is greatly influenced by the work of CHK America, in particular their Austin, Honolulu, and Orlando transit maps. The 2016 redesign of the Toronto Transit Commission system map was also an inspiration.

I’ve simplified (and somewhat distorted) the geography and separated as many routes as possible into their own lines. Streets/routes have also been simplified, mostly using a 15º grid. The L-shape of Victoria’s service area did unfortunately mean I had to use inset maps.

For the different frequency levels, I’ve set three line thicknesses for daytime service levels: one for 15 minutes or better, one for 30 minutes or better, and one for all other all-day weekday service. Limited stop/express service is displayed as an inline dash for any of these frequencies.

Then I set three different services types, each with its own colour:

Some Standard routes operate 15 minutes or better during the day on weekdays, but not in evenings or on weekends (such as 2/2A and 11), so they keep the same thickness as the Frequent routes but have Standard colouring.

Route colours were chosen to be bright, but not too ‘neon’ while also being colour-blind friendly.

I tried to make fonts as large as possible, keeping in mind the larger number of older transit customers. Street names are 7pt, route numbers are 8.25pt which are pretty large for a transit map. I had originally started with DIN Next, but switched to Roboto as I thought it would be easier for others to work with in the event that this map is released open source.

This map is sized at 28″x18″, which folds down nicely to 4″x9″ – the same size as BC Transit’s Riders Guide (I had originally wanted to go with 24″x18″, but I couldn’t fit in all the insets and legend). It will fit nicely into rack card holders on buses, in libraries/stores, and on BC Ferries. The number of folds is kept somewhat minimal (seven total) and completely unfolded, the map shouldn’t be much wider than a single seat on board a bus.

I’m also considering folding it down to 3.11″ x 6″ (ten folds total) which makes it roughly pocket/iPhone Plus sized

It can also be easily adapted to a 24″x36″ poster! Several bus exchanges throughout the region already have information boards where this poster could fit. Granted, it would probably be hard to read at a distance, but the opportunity still exists to provide an overview of the entire Victoria transit network.

This map was featured in the Saanich News (with a lovely photo of our old office setup). Additionally, we received very positive feedback from BC Transit even though this map is in no way affiliated with them.

This is by no means the final version of the map. Since late 2017, BC Transit has made several changes to their services, including new routes and new frequencies.

How can we help you?

I’ve been helping make transit maps professionally since 2007, and as a hobby for much longer. I work both diagrammatically and geographically, and can make a map as abstract or as detailed as you can image. And it’s not just transit! I’ve worked with the Victoria Harbour Master, and on dozens of real estate amenity maps.

Mass Velocity acknowledges with respect that we operate on traditional and unceded lək̓ʷəŋən (Lekwungen) territory.